The Best Video Games to Play on your laptop in 2020

Best gaming laptops pack hardware of a mighty tower PC inside a portable chassis design. We have seen a remarkable improvement in terms of portable hardware which in turn has transformed the mobile gaming world. Now you can play top games of 2020 on your gaming laptop like a pro. You will not face performance-related issues like overheating, stuttering, or screen ghosting. That’s how far technology and the gaming industry have come in 2020.

Most gamers do not know what model is worth buying or which games to play on their laptops. In case you have the same questions in mind, we are here to help you with both choices. We have enlisted the top games of 2020 that you can play on the best gaming laptops.

Here is the list of best videos games that you would enjoy playing in 2020. We have enlisted the right laptop for each game as well as per its requirements. So, you can play games like they are meant to be. 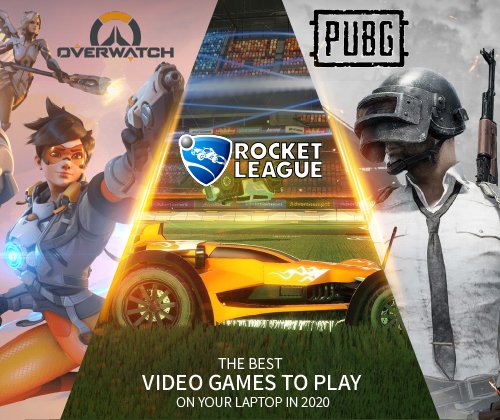 This is a self-indulging shooting game which has evolved from first-person to a multiplayer shooter gameplay. The game is a perfect blend of characters and their unique abilities, which in turn delivers enjoyably action within the game.

The minimum memory requirement for Overwatch is 8GB but you can upgrade your RAM to 16GB or 32GB. Graphics card is another thing to look at if you want to enjoy this game with clear visuals. We recommend you get at least Radeon Vega 8 by AMD or NVIDIA’s GeForce GTX 1050Ti card.

HP gaming laptops are ideal for Overwatch if you want to get the most out of this game. HP OMEN 15-Dc1007na is a decent choice which comes with 16GB memory and the GeForce RTX 2060 6GB.

Player Unknown’s Battle Grounds or PUBG is an FPS game that has taken over the genre with its jaw-dropping graphics and game strategy. The game is more about surviving through divide and conquer than mere shooting. What started as a 4-person team game has now become the most played game of all times.

PUBG is a space-demanding game which requires at least 30GB storage to run smoothly. So, you must get a laptop with at least 8GB RAM and invest in a solid-state drive (SSD). Since the game processes several graphical integrations, NVIDIA’s GeForce GTX 1050Ti or 1060 (6GB) is the right pick.

For diehard PUBG fans, ASUS gaming laptops are great models to pick. ASUS ROG Strix Hero III is the right choice if you want to play PUBG with high settings on.

Rocket League is a fast-paced game that offers you the experience of both soccer and racing at the same time. This is physics-based gameplay which you would fall in love with, thanks to its replayability. Cross-platform progression and legacy status make the Rocket League one of the top games of 2020.

Rocket League is a light game which does not take much space on your drive. However, to relish the gameplay, you must get a laptop with high memory and quality graphics card. An 8GB RAM with SSD storage, and the GeForce GTX or RTX graphics card can ensure a smooth performance.

For Rocket League, we recommend you get a model from Lenovo gaming laptops range. Lenovo Legion 7 is a great choice if you want to make your gaming laptop future-proof.

Best gaming laptops let you relish video gaming with high graphics. With the right combination of hardware, you can take the lead in the battlefield and crush the competition. So, choose your laptop according to the requirements of your favourite game.

Apple’s Head of Global Security is Charged For Bribery